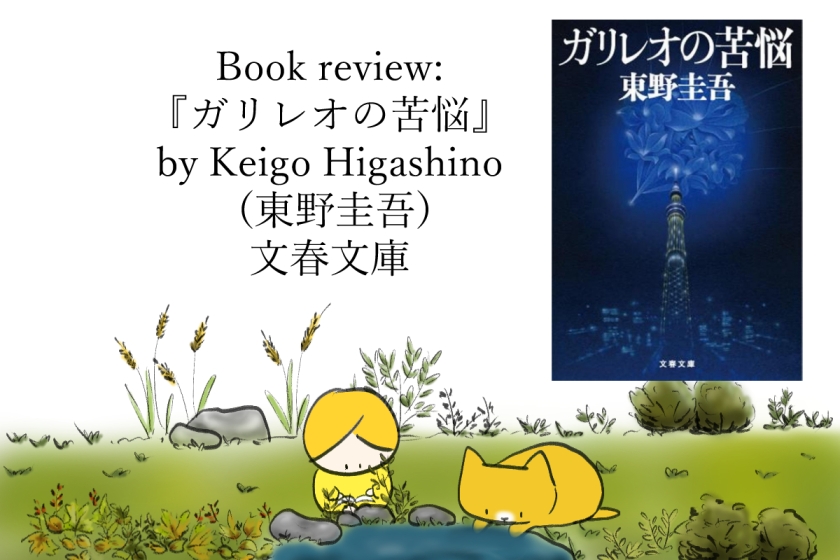 As far as I know, this book has not been translated into English.

As usual, I found the cases in this book very entertaining, but to be honest, this book might be the one I enjoyed reading the least so far. (I am reading the whole Galileo series in order).

The first short story introduces detective Kaoru Utsumi who now works with Kusanagi. I read Salvation of a Saint some years ago in translation – which is the next book of the series and features Kaoru – but I did not remember the character of Kaoru well. As a result, I was very surprised by this addition and even more surprised (disappointed might be the correct word) to see her take Kusanagi’s place.

In the five short stories, what used to be the duo Kusanagi-Yukawa is now the duo Kaoru-Yukawa. It is always Kaoru who asks for Yukawa’s help, accompanies him in his experiences and discusses the case with him. Kusanagi is very absent from the case and does not seem to be doing anything. Worse, he appears as a stubborn and not very good detective in the first story, contrary to the zealous and bright Kaoru.

This might be an unpopular opinion (and the next books might make me change my mind), but I don’t like Kaoru. There is nothing wrong with this character, but I just think that she is an unnecessary addition. I have read three books (one novel and 10 short stories) with the duo Kusanagi-Yukawa, so losing this established duo is very unsettling. Readers who follow a series do so because they want to see their favourite detective again. The duo of detectives is such an established pattern in crime fiction, that changing the protagonists midway feels like a betrayal.

I found this addition so strange and out of place, that I checked online. On Wikipedia, it is said that the character of Kaoru was added for the television… Well, it makes sense. I am quoting Wikipedia:

(「落下る」is the first short story in the book.)

I never watched the drama, so this is something that I was not aware of, but Kaoru appears right from episode 1 in the TV series (which is the first short story of the first book, and obviously she had not yet been created at the time). So for people who only watched the drama, the main duo has always been Kaoru-Yukawa… strange!

I doubt that Higashino would have created Kaoru if it weren’t for this request. This also explains why Kaoru has taken Kusanagi’s place instead of just working with him and Yukawa together as a trio.

I am okay with TV dramas changing things to please the audience or to make things more interesting. But here, the problem is not that the TV series departs from the books, but that the books change their line to fit with the series. I understand that Higashino wanted to create Kaoru himself, but I would have preferred to continue with Kusanagi in the books and let the TV series do whatever they wanted.

I am sure I will get used to the new duo in the end, but it was a bit of a shock in this book. I also hope that there won’t be too much of a sentimental relation between Yukawa and Kaoru because I am not usually a fan of romantic elements in detective fiction. We’ll see…

The last short story also had an interesting pattern, much similar to Christie’s the ABC murders.