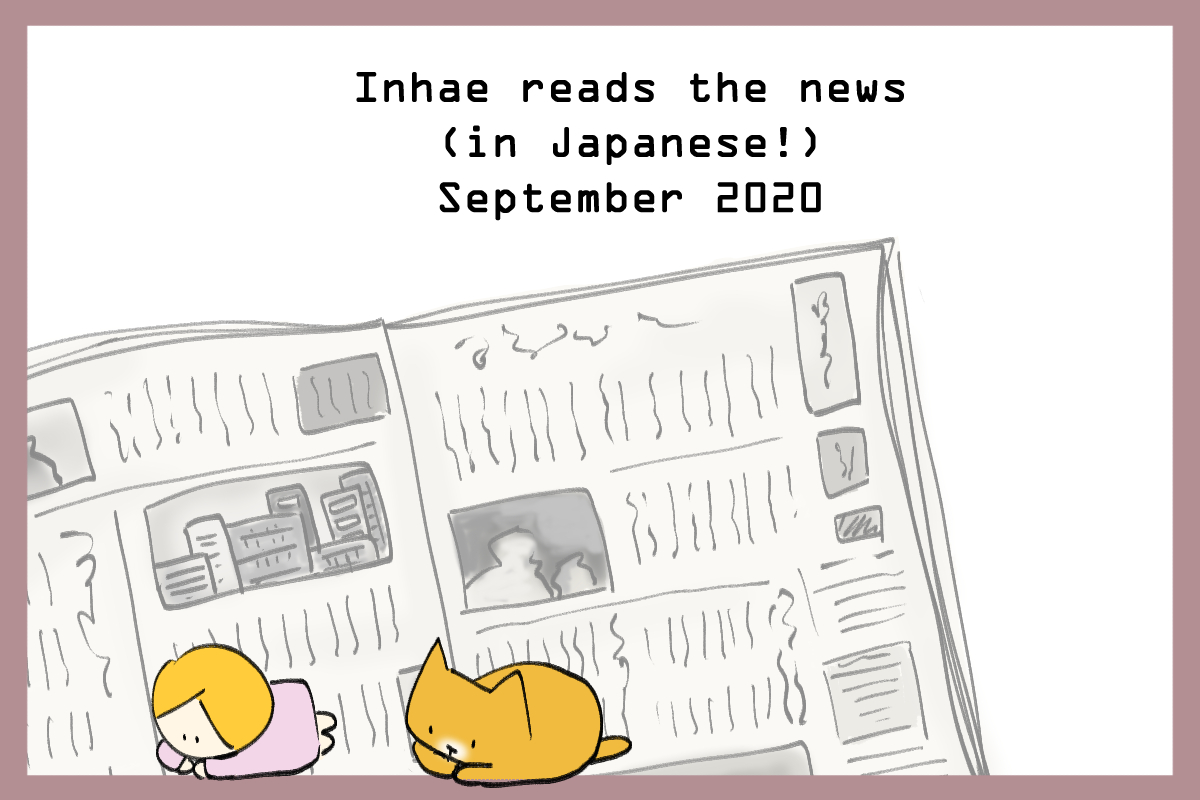 Note: I haven’t been able to translate all the extracts I chose by lack of time. I also found the articles rather difficult to read and quite long for most of them. I got discouraged more than once, not being able to understand the articles by simply reading them. Even after looking up words, some paragraphs remained obscure. Either I misunderstand grammatical patterns, either they hint at references I don’t know, or I just don’t understand what the author is trying to say. In any case, I still have a lot of work to do before I am able to read the news in Japanese…

The biggest news of this month is of course Abe’s resignation as Prime Minister.

All newspapers are hoping for rapid elections to avoid any political turmoil:

Given that the LDP is leading the state, it is necessary to choose a new leader rapidly to avoid political turmoil.

The LDP must organise elections rapidly and decide on a new leader in order to minimise political confusion.

Mainichi also says that the election should happen as soon as possible but warns that it should not be held behind closed doors:

Given that we are still in the coronavirus crisis, it is necessary to choose a new leader rapidly. However, deliberations must not happen behind closed doors.

We must hold elections that include the participation of all party members and party supporters and that are transparent to the public.

Tokyo goes further in this direction, saying that the public has a right to know about each candidate’s position:

Obviously, there must be political debate accessible to the people. Each candidate must explain in details his ideas and measures to deal with burning issues like the coronavirus.

All newspapers also go through Abe’s legacy, but, as you can imagine, conservative newspapers and left-wing newspapers don’t talk about the same legacy. To talk about Abe’s achievements, Sankei uses the word “remarkable” (著しい) and Yomiuri the word “great” (大きい).

On the other end of the spectrum, Mainichi talks about “negative legacy” (負の遺産) and Tokyo says that Abe’s government has created 統治機構の根腐れ.

All newspapers agree to say that Abe government has been “stable”. In Japanese, the word 安定 is the one usually used to refer to Abe’s two terms as Prime Minister.

I find very interesting to compare the formulations used by newspapers to talk about the political stability brought by Abe. Both Yomiuri and Sankei state the fact plainly 安定した国政運営だった and 不安定だった政治を立て直したことである.

Contrary to firm endings like だった and ことである, Mainichi and Asahi only acknowledge this fact. Talking about Abe government bringing back stability to politics, Mainichi says that it is 事実だろう and Asahi: 間違いあるまい:

Both Yomiuri and Sankei state that there was no other choice for Abe than to step down if his health condition has worsened. Yomiuri says: 病気が原因ではやむを得まい and also mentions that Abe has overwork might be the reason why Abe’s illness worsened.

Mainichi also recognises that his resignation might be inevitable (they use the same expression as Yomiuri: やむを得ない), but they note that it happens at the worst time and will create confusion: 任期途中の辞任で混乱を生んだことは残念だ。

Asahi points out that Abe’s resignation happens at a time where the government has lost the public’s confidence.

Tokyo opens its editorial with: 持病の潰瘍性大腸炎の再発が理由だという。健康悪化が理由ならやむを得ない。

I might be mistaken, but to me this formulation sounds like the author thinks that there might be other untold reasons. The use of という in the first sentence shows that the author just quotes the reason given by Abe but does not take it for granted. Similarly, the use of なら also hints that the author is not convinced that the reason given is the real reason. Tokyo’s sentence 健康悪化が理由ならやむを得ない looks similar to Yomiuri’s 病気が原因ではやむを得ない, but using で (because of/due to) or なら (if it is true that/if it is the case that) makes a difference.

Finally, it is interesting to contrast Sankei’s wish that Abe’s successor go on with Abe’s good results:

We wish that the candidates will value the direction and results of Abe government.

And Tokyo’s wish that Abe’s successor will not go on the same line of actions:

The question is now how will Abe’s successor depart from Abe’s politics who rotted the political system and treat the Constitution lightly.

Information about the upcoming election to select Abe’s successor has come out on Tuesday.

On Tuesday 1st, the LDP announced that the election for Abe’s successor will follow an emergency procedure according to which only members of the Diet and some local representatives will vote.

However, in order to avoid a political vacuum in this time of crisis, only the 394 Diet members and 141 representatives from the the 47 prefectures will be able to vote. Arguments given are that organising a general election would take up to 2 months.

This is likely to disadvantage Shigeru Ishiba, popular among local voters but unpopular among lawmakers for his critical position toward Abe’s politics. On the contrary, Chief Cabinet Secretary Yoshihide Suga is in good position, having the support of five factions inside the LDP, including 細田派, the most influential one.

岸田文雄: Fumio Kishida. He is the Chairman of the Policy Research Council 政務調査会長 (せいむちょうさかいちょう). Articles refer to him as 岸田政調会長

石破茂: Shigeru Ishiba. As Ishiba does not have a particular function at present, he is referred to as “former Secretary General (of the LDP)” 石破茂元幹事長. Interestingly, articles in English refer to him rather as “former Defence Minister”.

Interestingly, all newspapers, including conservative ones, have a critical position towards the decision.

The least critic is Yomiuri, who acknowledges the necessity to speed up the process:

It is a necessity to speed up the election in order to reduce the political vacuum to the minimum.

While asking for more debate and discussions, Yomiuri does not question the reasons behind the decision, and says that it is normal due to the present circumstances.

Sankei seems to be siding with those asking for an election process that would include all the party members.

It is regrettable that the LDP does not hold elections that would include the more than one million party members and party supporters. Even if a lot of citizens do not belong to the LDP, if members do vote, more attention will be brought to the elections and politics in general.

And Sankei is calling for a public debate:

There is only little time between the announce and the vote, but what is the most important in general elections? It is that the candidates compete with each other before the public for their political view.

Mainichi points out that Shigeru Ishiba who received a strong support among local voters during the last elections, will be disadvantaged. They conclude:

No wonder people think that the winner will be decided based on factions influence.

It also seems obvious that Yoshihide Suga, who receives the support of the strongest factions, will win the race:

For Asahi, the situation is not urgent to the point of depriving party members from their rights:

The Diet is closed at the moment, there is no new outbreak of coronavirus infection and Abe has said that he would go on with his functions until a successor has been chosen. For Asahi, there will be no “political vacuum” as stated.

Asahi even mentions that the real purpose behind this choice could have been to cut off the road to Shigeru Ishiba and secure the position for Yoshihide Suga.

For Tokyo too, things also look like the real purpose was to restrain Ishiba’s chances:

As mentionned, Suga’s victory was not a surprise. On Saturday 12th (two days before the elections), the three candidates have presented their policy concerning the anti-coronavirus measures and economic measures at the Japan National Press Club. Reporting on the public debate, Yomiuri and Mainichi only focus on what Suga said, clearly showing that the election are just a formality.

The election took place on Monday 14th. I read the editorials of the 15th, but I must admit that they are quite difficult to understand. I just extracted some information:

Yoshihide Suga mainly said that he will continue in the same line than Abe. While continuity might be better than brisk change in this time of crisis, assuming the role of Prime Minister (the LDP has such a majority in the Diet that the head of the party becomes the Prime Minister) requires a solid policy of one’s own.

This idea seems well summed up by Tokyo’s formulation:

Looking back at M. Suga’s speeches, [we notice that] he was so focused on talking about Abe government’s “continuation” that he barely mentioned any “new” policy.

The two words generally used are 継続・けいぞく (continuation) and 前進・ぜんしん (progress, advance, improvement). I chose to translate this last one with “new” because it seems better if we use it in opposition to “continuation”.

This is echoed by Yomiuri:

Given that [M. Suga] will be executing policies, it is not enough to talk about “continuation” only.

I didn’t know the expression 心もとない. It means “to feel uneasy/insecure about” or that something is “unreliable, untrustworthy, precarious, doubtful”. After deliberating for some time on how to translate it, I gave up.

Sankei also wishes that Suga adopts the role of a Prime Minister with a strong leadership who can lead the country in a time of crisis. They add:

As for Mainichi, they criticise Suga for not having a political vision of his own:

Apparently, Suga said that he would resolve once and for all the scandals that stroke Abe’s administration… Asahi wonders if this is possible:

Finally, Tokyo says that merely pursuing your predecessor’s policy is great if this policy was good, but we cannot wish that the new Prime Minister goes on with Abe’s handling of the coronavirus crisis: そのまま継承すべきではないのは当然だ。

I am just having a quick look at some editorials:

Yoshihide Suga kept Taro Aso as Finance Minister and Toshihiro Nikai as secretary-general. Yomiuri says that keeping these two politicians at these key posts is a way to maintain stability:

But Mainichi points out that the Ministry of Finance under Aso had been directly implicated in the Moritomo scandal:

It is also surprising to see Taro Aso staying in office as Finance Minister and Deputy Prime Minister, given that he should have taken responsibility by resigning when it was discovered that the Ministry of Finance had falsified documents in the Moritomo scandal.

手を染める means “turn one’s hand to sth”. My English is not good enough to find a good way to translate it or to know whether this expression can be used in this context.

And Mainichi fears that Suga will only continue in the same line than Abe, and not change his style of politics (政治手法), and again, criticise the “継続” position of Suga.

This is echoed by Asahi:

We cannot bear the thought of M. Suga “continuing” even the problematic style of governance of M. Abe.

Noting that women still were not representated in the Cabinet, Tokyo adds:

I felt a little overwhelmed by the number of articles to read, their length and difficulty. In order to understand them, I have to switch to a “study” mode, look up words, re-read the same sentence several times and look for complementary pieces of information in articles in English. I was also quite stressed in September for other reasons, so I didn’t have enough energy left to work on the translations.

I will take some holidays towards the end of October, so there will be no post in the news section next month.