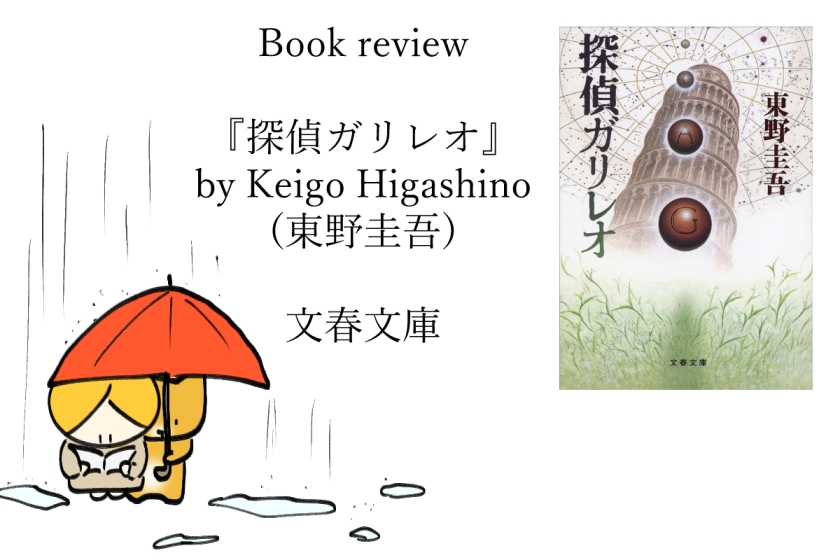 This book is a collection of 5 short stories all initially published for the magazine オール讀物 between 1996 and 1998. This book is also the first installment in the Galileo series, but even though several books of the series are translated in English, this opening title has not been translated.

Reading Keigo Higashino after quite a long time really feels good. I am always amazed at how good his short stories are. Even in a reduced number of pages you get all the thrill of a good crime novel.

The short stories of 『探偵ガリレオ』 all follow a similar pattern with detective Kusanagi investigating a murder case and asking for his friend’s advice, the physician Yukawa, whom Kusanagi’s chief calls Galileo.

All the stories and cases have a scientific element to them, usually related to how the murder was committed but not exclusively. This element explains the necessity for Kusanagi to seek Yukawa’s advice, and it also distinguishes the Galileo series from Higashino’s other books.

I was a little surprised by the systematic introduction of a scientific explanation in the short stories. The only books I have read from the Galileo series are The Devotion of Suspect X and Salvation of a Saint which are respectively the third and fifth books in the series. I may be remembering wrongly, but I don’t recall these two books as containing much, if any, physics. Either I am mistaken, or there has been a change in the series, from more to less scientific.

The main particularity of the Galileo series (or at least, the first book) is the scientific element, so it looks like it does not make much sense for me to read the series. But the thing is that I loved this first book so much that I immediately purchased the second volume after finishing it. Even if you are not that into physics, the short stories remain extremely engrossing. They are worth reading for the investigation only, the scientific part being a plus for readers who like physics.

I still prefer the Kaga series over the Galileo series so far, but I found this first book very addictive!