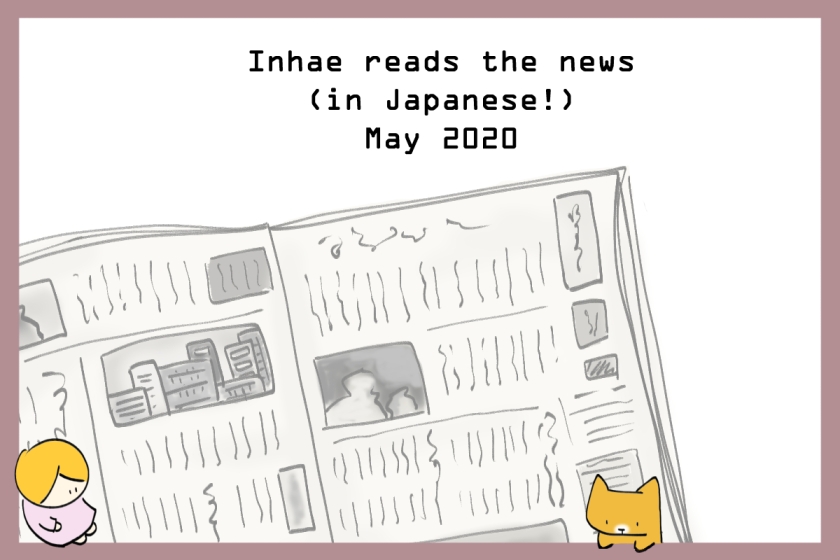 Writing this post each month greatly helps me to improve my reading level by forcing me to read news articles and go out of my comfort zone. However, it also takes me a lot of time because I tend to add more topics as they come out. From this month on, I will limit myself to one news a week for the first three weeks of the month.

Apart from the coronavirus and the repercussions of the state of emergency on people’s lives and the economy, the major news this month was the amendment on the Public Prosecutor’s Office Law.

On May 1st, I expected all newspapers to have an editorial about the first anniversary of the Reiwa era. I was surprised to find that only the Yomiuri Shimbun and the Mainichi Shimbun had done so.

Yomiuri and Mainichi both mention that the imperial couple had visited the prefectures hit by typhoon Hagibis last year and directly met and comforted the victims, like the former imperial couple used to do.

However, the coronavirus makes it impossible for the couple to meet and talk to the patients and people affected by the virus.

However, with the infection spreading, it is impossible [for the imperial couple] to meet and encourage directly the patients and the medical staff working in the field.

National events related to the imperial family and international meetings have also been cancelled or postponed.

This year, imperial events have been hit by the spread of the coronavirus*.

影を落とす is translated in my dictionary as “to cast a dark shadow” which I find a little too dramatic for simply cancelled or postponed events. I don’t know if 影を落とす has a lighter nuance in Japanese or if this meaning was intended.

*This translation has been suggested to me on Twitter, it is better than what I wrote previously!

All of our left-wing newspapers (but not Yomiuri nor Sankei) have written an editorial about a government bill aiming at extending the retirement age of public prosecutors.

The editorials were published on the 11th or 12th, at a time when the bill was discussed at the Lower House. The revision bill states that the retirement age of prosecutors could be extended from age 63 to age 65 with the cabinet’s approval.

These discussions have given rise to a huge public outrage with millions of tweets, including several tweets from celebrities, criticising the government’s decision (＃検察庁法改正案に抗議します). Not only the timing is ill-chosen with the coronavirus still killing people, but critics also point out that this revision will give the Cabinet the possibility to decide which prosecutor can stay in office longer.

Mainichi is the first newspaper to have written an editorial to criticise the amendment, on the 11th. It does not mention the public outrage on Twitter, contrary to Asahi and Tokyo who published their article one day later, on the 12th.

Among other points, Mainichi points out that the Cabinet will be able to retain in office public prosecutors according to their needs:

But if the Cabinet or the Minister of Justice judge it necessary, [a public prosecutor] would be able to remain in office for a maximum of 3 years, even after they reach the mandatory retirement age.

The article ends on a strong condemnation of the timing:

It is intolerable to rush the approval of [the amendment] by mixing it with discussions around coronavirus measures.

I am tempted to add “intentionally mixing it”. I know that 紛れる can either mean that something is mixed in or among something, or that a state of confusion is intentionally used to do something unnoticed (for example: 騒ぎに紛れて逃げる). I think that it is this second meaning that is implied in our sentence, but I don’t know how to say it in English.

Asahi opens its article on a strong criticism, underlying that this amendment is against the separation of powers and the basis of democracy, thus echoing some of the criticism on Twitter.

If this bill is passed, deciding who remains in office and who leaves will be entrusted to the judgment of the current government. It throws away the efforts to achieve the separation of powers after the war and annihilates the independence of the public prosecutor offices.

I feel that 積み重ねてきた suggests that it took time and efforts to achieve something, so I added the word “efforts”, but I don’t know if it is correct.

Similarly to Mainichi, Asahi mentions the case of Hiromu Kurokawa, who was allowed to stay longer in office in January of this year. Abe said at the Diet that this amendment would not lead to arbitrary personnel decisions by the Cabinet. Asahi points out that this is exactly what happened in the case of Korukawa.

But isn’t it Abe’s Cabinet of the time who postponed the retirement of the chief of the Tokyo High Public Prosecutors Office (that is, Hiromu Kurokawa)?

The article ends on a similar note than Mainichi, saying that コロナ禍で人々は検察庁法どころではない.

Tokyo’s article is even more focused on the public reaction to the amendment. It says that:

With gatherings forbidden because of the coronavirus, [protests] took the form of an “online demonstration” via social networks.

The article also mentions that this amendment goes against the separation of powers, and that this should not be a priority now. It uses an interesting expression that I didn’t know to qualify this amendment:

We must prevent the approval of a bill that takes advantage of the State of Emergency, like a thief at a fire.

On Tuesday 19th, all our newspapers devoted their editorial to the same topic: Abe has decided to delay the enactment of the bill discussed in news 2. The media outrage was so strong, that it forced the government to step back, something rare in Japan politics.

All the newspapers explain what the amendment was aiming at and why this is problematic.

Yomiuri and Tokyo underline that extending the retirement age of public prosecutors from 63 to 65 is not a problem per se.

[Taking into account the aging population and slow birth rate], extending the retirement age of public prosecutors from 63 to 65 is appropriate.

There is no objection in [extending the retirement age of public prosecutors] to 65.

The problem is of course, that the decision to extend the retirement age or not is left to the discretion of the Cabinet, meaning it could favour public prosecutors according to their needs.

If a public prosecutor decides not to prosecute a politician, people might end up thinking that they did so out of consideration for the government, even if their decision was based on solid evidence.

As Tokyo points out: 東京高検の黒川弘務氏が検事長の職のままでいることに「違法」の疑いが持たれている。

There are suspicions that prosecutor Hiromu Kurokawa staying in office as Chief of the Tokyo High Public Prosecutors Office is “illegal”.

This amendment on the Public Prosecutor’s Office Law is seen as a post-facto way to align the extension of Kurokawa’s retirement age with the law.

We cannot get rid of the suspicion that [this amendment is a way to] legitimate post-facto the Kurokawa case.

Yomiuri does not say that the amendment can be seen as a way to legitimate the Kurokawa case, but only that it looks like it:

[The amendment was criticised because] it looked like a way to give consistency to this extended retirement age (meaning here, Kurokawa).

Then Yomiuri adds that the suspicions concerning the real purpose of the bill have arisen not because extending Kurokawa’s office might have been illegal, but because the government did not give enough explanations about why they took this decision.

As for Sankei, it says:

No matter how much the government insists that “the amendment of the Public Prosecutors Office Law has no relation with the case of Kurokawa”, it could not gain understanding.

All our left-wing newspapers are unanimous in saying that Kurokawa’s special treatment must be withdrawn:

Before we start discussing the amendment, Kurokawa’s extension must be withdrawn.

And it is also necessary, of course, to withdraw the decision of the Cabinet of the end of January (meaning, the decision to extend Kurokawa’s office).

It must be withdrawn at once. (here again, meaning Kurokawa’s case).

That’s it for this month’s post, but I cannot not mention that Hiromu Kurokawa announced his resignation over a gambling scandal. The news came out on the 21st, just two days after our news 3. Hiromu Kurokawa has played mahjong for money with reporters of a newspaper during the state of emergency. Of course, there are editorials about this resignation, and I am tempted to study them, but I will stick to my “one news a week” rule!

Have a good week!