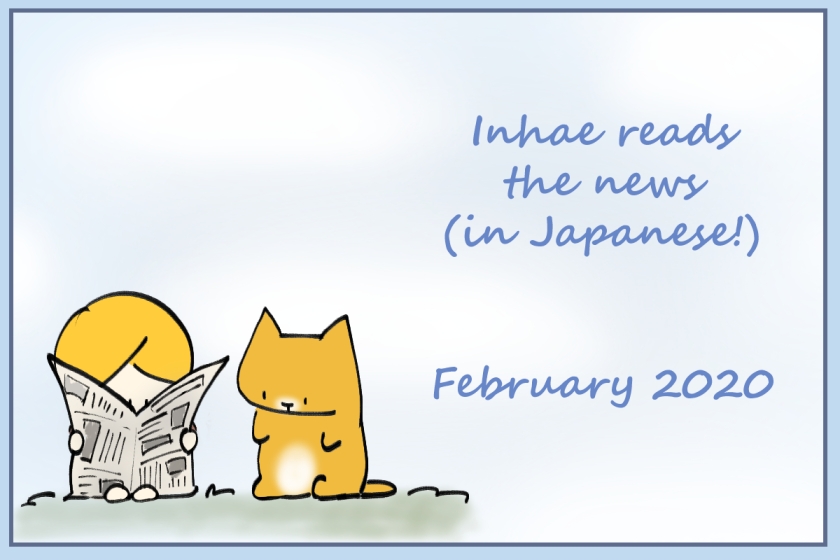 Welcome to a new article in my series “Inhae reads the news (in Japanese!)”.

I will choose topics on which at least three of these newspapers have written an editorial. I will also limit myself to three topics per month because reading the news in Japanese and writing this post still take me a lot of time.

As always, I have to warn you that there might be mistakes in my translations as well as in my understanding of the social/political issues I talk about. This post is like a personal notebook where I try to improve my reading skills in Japanese, my knowledge of current issues, and my English!

(Of course, this month’s main topic for all newspapers was the coronavirus, but I was tired to read about it so I deliberately chose other themes.)

Several newspapers have devoted an editorial to the dispatch of the MSDF (Maritime Self Defense Force) destroyer Takanami to the Middle East. The destroyer will join an ongoing intelligence gathering mission. The government said that the mission’s purpose is to ensure the safety of ships trading with Japan in the Middle East region, especially oil tankers that deliver oil to Japan.

First, Yomiuri starts by justifying the dispatch of the vessel:

Japan relies on the Middle East for the majority of its imports in oil. More than 3000 vessels [commercially] related to Japan sail through the territorial waters of the Middle East per year. It is only natural that the government should actively engage in preserving the security of the commercial maritime routes and deploy the Self-Defense Force.

It then explains that the MSDF alone will only have a limited range of action. The major concern for the Japanese government is the protection of the oil tankers that provide Japan in oil and sail through the Middle East. But if these tankers were attacked, the destroyer would not be able to defend them, being officially in a mission of research (調査・研究). The government could then issue an order for “海上警備行動”, but even then the destroyer would only be able to protect Japanese ships. The Yomiuri underlines the necessity to prepare for any scenario.

If I understand it correctly, the 海上警備行動 can be ordered by the Defense Minister if the security of Japanese lives or properties are being threatened. It allows the MSDF to take necessary actions to maintain security, but I don’t know concretely what it means. The last time the 海上警備行動 was issued was in 2009, against piracy off the coast of Somalia. (see Wikipedia)

The Yomiuri never mentions that the decision to deploy the MSDF in the Middle East was taken by the Cabinet only, without going through the Diet. This is a major point of criticism for left-wing newspapers.

Mainichi and Tokyo both acknowledge the importance to ensure the safety of commercial ships, but they criticise the way the decision was taken. Mainichi says:

Deploying an armed force to foreign seas is a heavy political decision. It should have gone through thorough discussions in the Diet, but the government has made the decision through Cabinet discussions in last December, and on January 10th Defense Minister Taro Kono ordered the dispatch.

Tokyo also underlines the fact that the dispatch has been decided by the Cabinet only:

The decision was taken by the Cabinet only, without going through the vote of the Diet that represents the people. Isn’t the participation of the Diet insufficient?

Normally, the dispatch of the SDF is limited by the Constitution. However, it now looks like the government can dispatch troops anytime under the flag of “research” and without going through Diet deliberations.

Mainichi insists on this point:

But, in the Constitution, the Self-Defense Force is forbidden to use weapons in foreign seas, and its deployment in dangerous territories and maritime territories is restricted by the law. If we can deploy forces when we want and where we want under the flag of “research”, we are gradually getting closer to a regular army.

There is no guarantee that there won’t be other dispatches in foreign seas that are for research and do not pass through deliberations and resolutions in the Diet.

Even though Abe assured that this kind of dispatch will not be generalised, it still creates a precedent (先例) as Asahi, who also devoted an editorial to this topic, points out.

Abe’s heckling and the role of the Diet

On February 12th, during a Lower House Budget Committee session, Abe heckled the lawmaker Kiyomi Tsujimoto saying that her questions were meaningless. She was tackling Abe on several points of controversy like the Cherry Blossom Party or the Mori-Kake scandals and ended her questions by saying: 鯛（たい）は頭から腐る。(The right way of saying it would have been 魚は頭から腐る, it apparently comes from a Russian proverb. Kiyomi Tsujimoto used 鯛 instead of 魚 and apparently, there have been some discussions about the meaning of it.)

In any case, this is when Abe heckled her with his 意味のない質問だよ.

Several newspapers are concerned about the role of the Diet.

Sankei starts its editorial by establishing what the Diet stands for and by expressing concerns that today’s Diet is different:

The original role of the Diet should be to discuss important problems that Japan is encountering, to make the law and to establish measures to overcome crisis, but it is not the case at all.

The article then directly criticises Abe for his attitude during the Lower House Budget Committee session. It says that Abe later defended himself saying that Kiyomi Tsujimoto had used abusive language against him, but Sankei continues:

But it is shameful to see the Prime Minister of a country heckle a lawmaker of the opposition because he got angry at her criticism.

Asahi starts its editorial with similar concerns, saying that the present situation in the Diet is far from what it should be.

It is sad to see incidents repeat themselves that are far from the the “bastion of free speech” [the Diet] should be: reach better decisions through constructive debates.

This passage is very difficult to translate… I get the idea, but it is hard to stay close to the Japanese, and I cannot find a good way to translate 言論の府. My dictionary suggests “forum for free speech” or “bastion of free speech”. I chose the one that sounded the most dramatic, but I feel that Asahi means more “discussions” and “debate” rather than “free speech”.

Asahi also mentions that Abe never really answered the questions of the opposition concerning the Cherry Blossom Party, thus implying that Kiyomi Tsujimoto’s questions were justified and certainly not “meaningless”.

In short, the Diet is the place to answer the questions of the members, it is not the place for the government to make its campaign and refutations. Even if the other person belongs to the opposition, it is only right and proper that the Prime Minister and others should face the discussions with the utmost respect.

Abe said that he only reacted to what he considers to be “罵詈雑言” or abusive language. But Tokyo points out that Tsujimoto’s questions were not “abusive”, but rather a discourse that hit its target: 罵詈雑言ではなく的を射た発言だ, especially concerning the Moritomo and Kake scandals and, more recently, the problem of the Cherry Blossom Party.

Tsukasa Akimoto, who was a key figure in the legalisation of casino in Japan, had been charged with bribery and arrested. He is accused of having received a total of ¥7.6 million from the China company 500.com. Tsukasa Akimoto has been released on bail and gave a press conference in which he denied all the accusations against him.

Mainichi and Tokyo both want Akimoto to explain himself in the Diet. They both mention that, quite often, lawmakers who find themselves in the midst of scandals do not give proper explanations. The two newspapers express a similar thought:

If the Diet represents the people, then [lawmakers] should not refuse to give an explanation in the Diet.

The members of the Diet are representing the people. As such, don’t they have the responsibility to explain themselves in the Diet?

Sankei criticises Akimoto’s explanation during the press conference. Akimoto received brand-name goods from 500.com, but to deny the fact that these were gifts, he says that he intended to repay the Chinese firm back with meals or other means. Sankei says:

But what was made clear during the press conference is Akimoto’s lax perception of the case. Justifications like “I intended to pay it back later” can even be said to be childish.

Sankei also points out that Akimoto was released on bail on the condition that he does not get in contact with the other members of the House of Representatives suspected of having received bribes from the Chinese firm. Given that he wants to resume his duties at the Diet, it will be difficult to guarantee that they don’t get in touch. The newspaper then adds:

Given that we cannot rule out the possibility that Akimoto destroys evidence that contradict the story arranged beforehand, doubts remain concerning [the legitimacy of] the decision to release him early on bail.

It is interesting to note that Sankei is very critical against Akimoto, the bribery scandal and the fact that he was released on jail so rapidly. But interestingly, Sankei does not question the process of deliberations that led to the legalisation of casinos.

On the contrary, both Mainichi and Tokyo point out that if the officials in charge of the IR bill were corrupted, it is only fair to ask if the discussions surrounding the legalisation of casinos were just. Mainichi says:

With this case, the pros and cons of the legalisation of casinos is again questioned in the Diet. Akimoto was one of the officials responsible for the developments of the legislation.

Tokyo lists the points of discord concerning the law on Integrated Resorts like the risk of dependance and the scepticism concerning its effects on the economy. It then adds:

This was before Akimoto allegedly received bribes, but were the deliberations surrounding the IR bill conducted lawully? The Diet must take the opportunity of this affair of corruption to make its own inspection.

I recognise とされる as one of the N1 grammar points I learned last year, but I am still not sure about this translation. I also don’t know how to understand 自ら…

Comparing what different newspapers say about the same topic is extremely interesting, as well as seeing what they choose to talk about in the editorials. While left-wing newspapers regularly talk about scandals like the Cherry Blossom Party, I noted that, this month, only the conservative newspapers (Yomiuri and Sankei) have written an editorial for 竹島の日 (a topic of dispute with South Korea). I was also surprised to see that Sankei, though a conservative paper, could be very critical of Abe and the government. In this respect, it differs from the Yomiuri which seems to only repeat what the government says. On the contrary, all three left-wing newspapers tend to be similar, though when it comes to criticising the government, Tokyo seems to be the most radical, followed by Mainichi and then Asahi. I guess that the more I read, the better I will understand each newspaper’s position.