Inside That Japanese Book

I have decided to stop using the site NHK to write my post because the links get broken very soon. So this time, all the sources come from mainichi.jp. I focused more on politics this week.

On Saturday (14th), 30,000 demonstrators were protesting before the Diet building: 安倍政権退陣迫る 森友・加計問題で３万人. On the video, we can hear them chanting “安倍やめろ”.

The demonstration was before the National Diet Building in Nagatacho in Tokyo: “東京・永田町の国会議事堂前”.

The article says that the number of 30,000 demonstrators was provided by the organisers: “主催者発表”, but they don’t give the police’s estimation.

The demonstration is a response to the falsification of the documents relative to the Moritomo Gakuen scandal and the recent developments concerning the Kake Gakuen scandal.

The underlined part summarises the issue: among the documents found recently, there is a citation from the Executive Secretary to the Prime Minister of the time who said that the opening of the veterinary department inside the Kake Gakuen was “Abe’s item”.

There is a contradiction between what Abe said and what has been found in the document. Abe said that he didn’t know of the affair at the time. He also reiterated that nobody received instruction from him (to favour his friend’s school): “私から指示受けた人いない.”

But the document suggests overwise. To be more precise, the document mentions a visit paid by persons relative to the prefecture Ehime (愛媛県・えひめけん) and Kake Gakuen (加計学園・かけがくえん) to the Prime Minister’s residence (官邸・かんてい). During this visit, Tadao YANASE, who was at the time an executive secretary to the Prime Minister (内閣総理大臣秘書官), used the words “安倍の案件” to talk about the opening of the veterinary department. Later, a similar document has been found in the Ministry of Agriculture, Forestry and Fisheries (農水省・のうすいしょう).

When asked about it, YANASE said that “as far as he can remember, there has not been such meeting”: “記憶の限りお会いしていない”, while ABE refused to comment “コメントを控えたい”.

There has been a new discovery this week. It is a little complicated but what I understand is that: as stated above, two similar documents have been found. However, someone said that a similar document should be kept in the 文部科学省・もんぶかがくしょう or Ministry of Education, Culture, Sports, Science and Technology.

This is why a search was made inside the Ministry, at least I think so. The document could not be found but, instead, a mail has been unearthed. NHK reported that the mail was sent from the Cabinet Office to the Ministry of Education to communicate the schedule of the visit.

Later, on Thursday, it has been proved that the contents of this mail (the visit’s arrangements) had been shared with all the ministries and offices concerned. Therefore, it seems more and more perilous to deny that such a visit took place:

Despite Yanase’s efforts to not remember this visit, it seems more and more evident that the visit took place. There are also fewer and fewer reasons to doubt that the words 首相の案件 were indeed uttered.

Abe supports the attack against Syrie

Abe said that he supports the strikes launched by the US, the UK and France against Syria: 「米英仏の決意を支持する」安倍首相.

Fukuda on the accusation of sexual harassment

Recently, I read this excellent post by Kotobites on loanwords which reminded me how tricky these katakana words can be. And even so, it took me some painful minutes to understand that セクハラ was the contraction of セクシャルハラスメント. Now I seem to see this word everywhere… in any case, I would say that this topic has been the main story of the week.

Junichi FUKUDA (福田淳一・ふくだじゅんいち) who is an administrative vice-minister (事務次官・じむじかん) of the Finance Ministry (財務省・ざいむしょう) has been accused by a female journalist of sexual harassment (source). The accusation has been published by the weekly magazine 週刊新潮・しゅうかんしんちょう (issue 2018年4月19日号 which was sold on the 12th).

This is what the magazine says:

As you can see on the right, the magazine links these accusations with the Moritomo Gakuen issue to insist on the accumulation of scandals in the Finance Ministry:

I am glad that I can name the faces on the cover: from right to left we have: Nobuhisa SAGAWA who was a high official at the Ministry of Finance at the time when the documents have been falsified; Junichi FUKUDA, a top official of the Finance Ministry, now accused of sexual harassment; Taro ASO, Minister of Finance; and of course Shinzo ABE.

Fukuda is accused of repetitive 繰り返して・くりかえして verbal harassment of sexual nature: セクハラ発言・はつげん. On the site of the magazine, we can read “「キスしたい」「不倫しよう」「おっぱい触っていい？」”.

On Friday (13th), Taro ASO, Minister of Finance said「事実とすればセクハラという意味ではこれはアウト」but added that he had no intention to take a concrete step (?) yet: “現段階では処分しない意向を示した。” (I don’t know how to translate 処分・しょぶん here…)

On Monday, Fukuda finally commented on the accusation (source). He denied the accusation, saying: “「週刊誌報道で記載されているようなやりとりをしたことはなく、心当たりを問われても答えようがない」”. He added that he will initiate proceedings against the magazine for defamation: “新潮社に対し、名誉毀損（きそん）で提訴を準備している”.

On Tuesday Aso said that as long as the woman in question doesn’t come in the open, the veracity of the fact could not be proven: 女性が名乗り出ない限りセクハラを事実と認定できない. His words were: “状況が分かるように（被害者の女性が）出てこないといけない”. (source)

This request has been criticised by the opposition. Minister of Internal Affairs and Communications Seiko Noda (野田聖子・のだせいこ) insists on the difficulty for the victim to even talk to her family: “「家族にも言いづらい話で、相手方に話をするのは、私個人でも難しい」” She uses the expression “second rape” and says: “「女性が名乗り出たことで、セカンドレイプという形で被害に遭うことがあることを踏まえて、慎重に取り組みたい」” (source).

The opposition asks for Fukuda’s dismissal and hopes that he won’t get away with it: “「逃げ切れない」”. In the article 「逃げ切れず」福田次官更迭論、与党で拡大, we learn that, though Fukuda denied all the accusations, the magazine has published a record where Fukuda’s voice can be heard:

Despite this, Fukuda still denies the facts, as you can see in this press conference: 次官「潔白」強弁 発言「記憶ない」 (video in the article). As the title of the article suggests, Fukuda said that he “does not remember”. Asked about the recording of his voice, he said that he doesn’t know if it is his own voice: he says something like “録音された声が自分のものかどうかはよくわからないんで” at 1:10.

About the daily log of the GSDF in Iraq

On Monday (16th), some parts of the daily log concerning the activities of the Ground Self-Defence Force in Iraq have been made public. To summarise the context, this daily log contains all the activities of Japan GSDF when it operated in Iraq from 2004 to 2006. When asked for it last year, the ministry said that the log did no longer exist, but it has been “discovered” this year.

People guess that the log had been concealed because its contents will prove that the GSDF was exposed to combat and danger, which would also account for the many suicides of Japanese soldiers after they returned home. The GSDF was sent to Iraq to take part in peacemaking operations and its role was to provide humanitarian relief and help in reconstruction works. Soldiers were not supposed to fight.

We learn in this article (イラク日報「戦闘拡大」 防衛省、４３５日分を公開) that the log mentions “戦闘・せんとう” or “combat”, “fighting”:

We learn that, in reference to the armed conflict between UK forces and local armed group, it was said that the “fightings expand”, and this, near Samawah, where the Japan Force was dispatched.

We also learn that the government has always said that the GSDF was operating in a “noncombat zone” or 非戦闘地域・ひせんとうちいき. We can question again the compatibility of what the government said and the situation in Iraq at the time. I understand the use of 改めて・あらためて which means “again” as a reference to the scandal around the GSDF in South Sudan. Similar denying had led to the resignation of the Minister of Defence of the time.

Asked about it, the Minister of Defense Itsunori ONODERA (小野寺 五典・おのでら いつのり) said that the region where the GSDF meets the requirements to be defined as “non-combat zone”:

This article published on Thursday shows, however, that the area was not as safe as Onodera wants to think. The article says: “「非戦闘地域」 膨らむ疑念”. I learnt 膨らむ・ふくらむ to say that “a flower bud swell” (it must have been one of those N2 words…). But 膨らむ can mean simply “to expand”, “to rise”, “to grow”. So, suspicions are growing concerning the validity of the term “non-combat zone”.

At the end of the article, there is a list of attacks directed at or happening near the base of the GSDF: “陸上自衛隊宿営地などへの主な攻撃状況”. We can see that the base was repeatedly confronted with roquet attacks.

Nothing to do with politics, but since I read this article I simply can’t get out of my mind: 背中にカビで菌増殖…「知らなかった」 加齢臭の原因にも. Mangaka Yoshikazu EBISU (蛭子 能収・えびす よしかず) said on a TV show that he had mould on the back because he does not like taking a bath. Is it okay to come with that in the open? 😲

Anyway, what caught my attention was the word 加齢臭・かれいしゅう that I saw for the first time some days ago, posted on Twitter by Japanese is Fun:

I was baffled that such a word should exist. It even has a Wikipedia entry. Now we know that mould growing on the back can be a cause of 加齢臭…

I swear I feel the itch to go scrub my back! 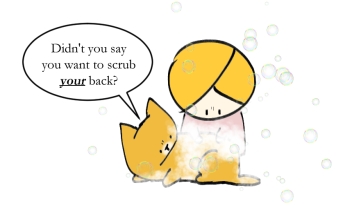 To stay on the subject, I also learnt the word スメハラ＝スメルハラスメント this week. There is an interesting article on NHK about it: あなたのニオイは大丈夫？

It is much easier to stay in the 政治欄・せいじらん and follow some threads than trying to absorb all that happens in the 社会・しゃかい section. If Japan politics are always so hectic, I will never be bored! Is it always so full of scandals?

I used Mainichi this time, but I would like to know if there is a difference between Mainichi and Asahi, like an editorial line or a tone and which one is more left. Next time, I will certainly read Asahi, though I doubt that I have the knowledge required (both Japanese and politics) to spot the difference. But it will be fun trying to.