Today, I would like to talk about the Japanese books I bought or received and couldn’t read because they were too difficult for me.

When I first wanted to read books in Japanese, I bought mangas. The problem is that with exception from One Piece and Case closed that I love, I don’t much enjoy reading mangas. I guess that I am simply not a manga reader. And then I discovered 益田ミリ（ますだ・みり）and her series of yonkoma manga すーちゃん. I read them all and love them. She has also written several books (not manga) that seem to be personal thoughts on everyday life. I bought one, which is 「今日も怒ってしまいました」. I chose this one because I understood the title, it was short (but they almost all are), and each portion of text inside the book was very short too, with dialogues. Also, the book alternates between text and yonkoma. But I bought it too early, it was still challenging to read a full page of Japanese at the time. So I put the book aside and went on studying. I don’t know why I never picked it up again, but now, I will definitely read it from time to time. I’ll put it in one of the storage bags on my desk to think of it.

Let’s continue with 「蹴りたい背中」by 綿矢りさ（わたや・りさ）. This book is very famous because it won the Akutagawa prize, and its author was only 19 at the time. I have always wanted to read this book in its French translation but never did. When I was well into learning Japanese and reached a point when I could read some things in Japanese, I bought this book. It may be one of the first novels I bought in Japanese. Maybe because it was short (180 pages), I thought it would be easy to read. But to me at the time, it was not, and I gave up pretty soon. It was some time ago, and I think I might be able to read it now. I will maybe insert it in my reading challenge for the year!

During my first trip to Japan, last year in March, I bought 「火花」by 又吉直樹（またよし・なおき）. At the time, this book was piled up everywhere because it had just been adapted into a drama. Once again, I was misguided by its length: 180 pages. It was much too difficult for me. If I remember correctly, there was this scene at the beginning when the two protagonists perform a manzai (a traditional style of stand-up comedy involving two performers). I was completely lost, haha, I vaguely recall that I could not understand at all what was going on. Even now, a year after, I am not sure if I can read this book. I will keep it for later!

I have been a little enthusiast some time ago and bought several books from different renown authors.

First, I bought a book by Dazai, which was completely crazy because it is obviously above my level. I got influenced by the manga Bungo Stray Dogs (文豪ストレイドッグス) who was pretty popular at the time. This manga has named its characters after great Japanese writers and given them some of the real authors’ characteristics. Along with the promotion of the manga, the publisher 角川文庫 had added a new manga-related cover to all the books by authors cited in the manga. If you were standing in front of these neatly piled up books, I swear that it was very tempting to buy them all. That day, I made the solemn resolution to read them all, bought 「人間失格」by 太宰治（だざい・おさむ）, read 10 pages of it, and that was the end of my resolution! I don’t think that I will try this book again this year…

Last December I went to Kyoto for the first time. I thought that it would be great to read some Kyoto-related stories or novels that take place in Kyoto before the trip. I bought two of the most obvious titles that come to mind when talking about Kyoto:

First, a book I read in French a long time ago by an author that I would like to read more and know better: 「金閣寺」by 三島由紀夫（みしま・ゆきお）. I read a third of it and gave up. It was very difficult to read, but some passages were okay and gave me the impression that I could go on. Even if I could not understand all the subtilities of the story, I promised myself to come back to this book years later when I reach a necessary level, and just enjoy what I could for the time being. If you know the story, you know that the protagonist meets Kashigawi at some point in the novel. The first time they met, Kashigawi starts a very long monologue about I had no idea what because I could not understand a word and was literally waiting for him to stop talking. After that, it became harder and harder because it seems that everytime Kashigawi talked or was involved, I didn’t understand. And so I gave up. Again, I am not willing to start again soon because this experience was not a long time ago. But I will read it one day, I want to!

The other title was 「古都」by 川端康成（かわばた・やすなり）and, after my disappointing results with the Temple of the Golden Pavillon, I didn’t even open it. First, I thought I could not possibly read Kawabata if I couldn’t read Mishima (I may be wrong, but that is how I was thinking), secondly, there was no time to read it before going to Kyoto and finally, I came back from my trip with a lot of books for my 2018 reading challenge and I more or less forgot about it… 😳

And finally, a book I already talked about on this blog: 「シャーロック・ホームズ対伊藤博文」by 松岡圭佑（まつおか・けいすけ）. A novel that mixes fiction and historical events and where Sherlock Holmes meets Hirobumi ITO! This is the book (from this list) I mostly want to read, but it is still out of reach. I started it some time ago, and the opening scene was okay because it described something every fan of Conan Doyle knows: the Reichenbach falls. Somehow, I could follow the narrative and descriptive parts, but things got out of control when I reached the first dialogues. Surprisingly for me, the dialogues were more difficult to understand than the descriptions. Maybe it was just this first particular confrontation that was full of references and subtilities… Anyway, I was lost and judged that I should better wait a while before really starting this book.

We all tend to show the best of us to others, so I naturally post more about the books that I finished, than the ones I gave up on. The truth is that there are a lot of them, there are also the books I wanted to buy but didn’t because I couldn’t make out the summary (or sometimes even the title!). I think it is a good thing to position oneself in some kind of virtual cartography of books and to know what we can and still cannot read. Knowing this allows me to pick novels that fit my level, try things harder from time to time or on the contrary, retreat to comforting areas when I need to. 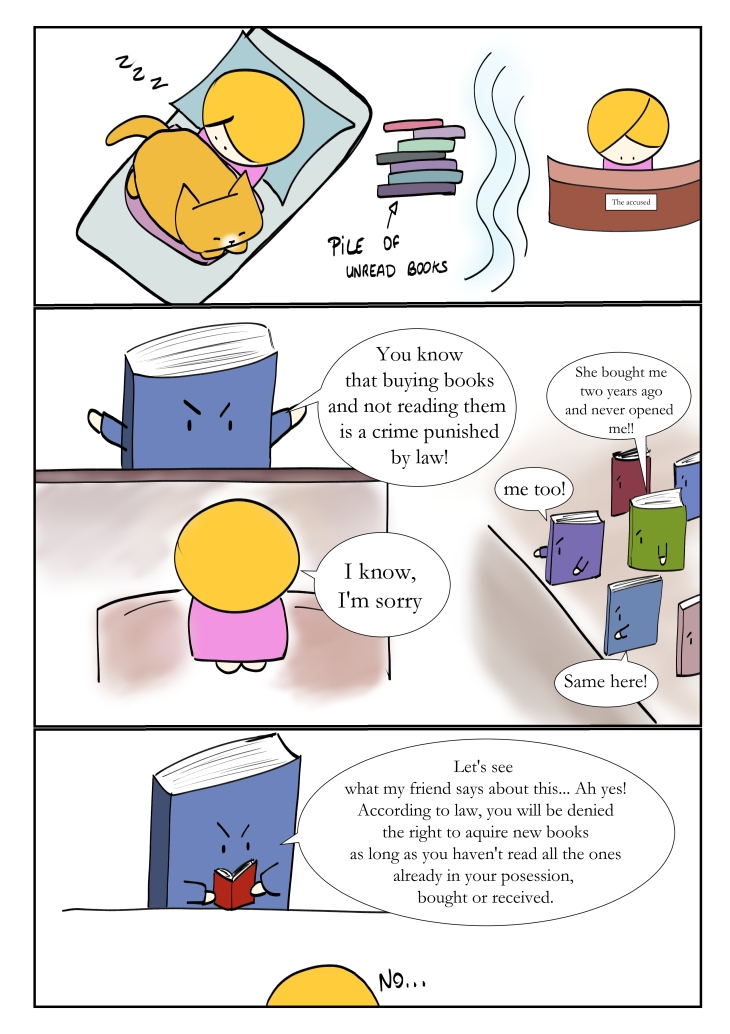 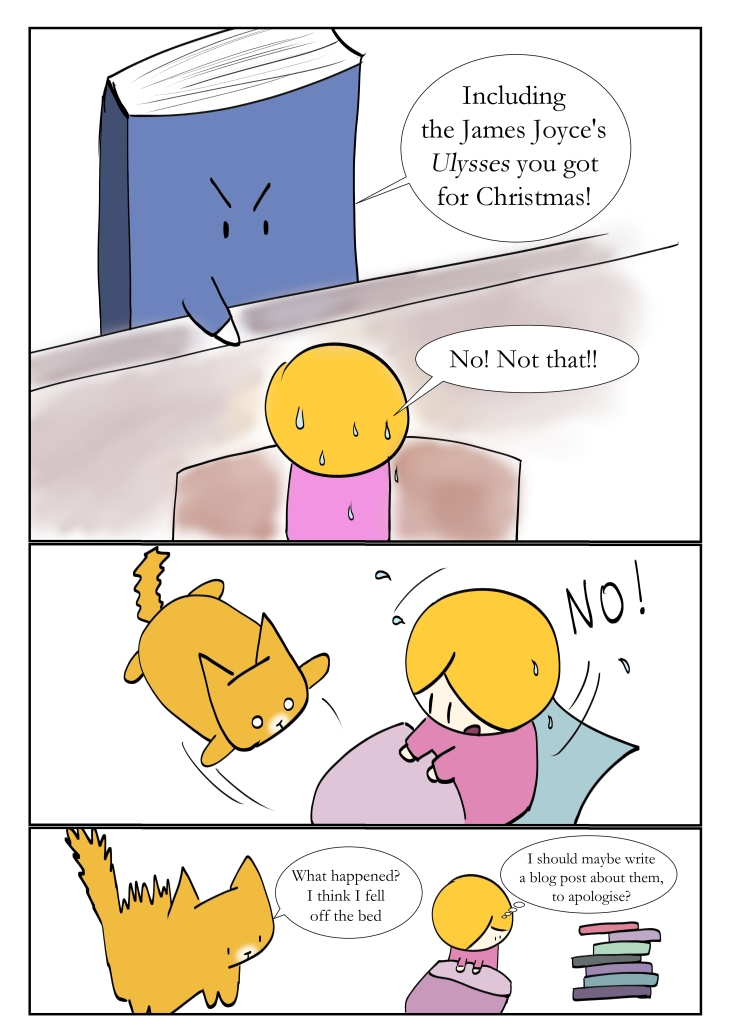