Usually, I study a news article every Friday. But last week, I decided to change my routine and try to keep an eye on the NHK News website every day. I hope I managed to extract the news of importance, but I certainly missed a lot of information. Anyway, this is an attempt at giving an overview of the week in Japan (internal affairs only).

The Moritomo Gakuen scandal is still in the headlines. On Monday, an NHK article said that popular protest still spread before the Diet building: “森友問題 国会前では抗議活動続く“.

The people assembled in the protest were yelling in chorus: 「文書の改ざん徹底糾弾」, asking for a thorough investigation to find who gave the order to falsify the documents.

On Tuesday, the ruling party finally accepted the request of the opposition: Sagawa will testify in the Diet on March 27th. Sagawa was a high official in the Ministry of Finance at the time of the sale. One article’s title on the subject is “佐川氏の証人喚問 来週27日に衆・参両院の予算委で“.

Some obscure problem with pension data

Meanwhile, another scandal is very present in the media but also quite tricky to understand. I had to read English sources to understand it… A Japanese firm who processes the data relative to pensions entrusted a part of the job to a Chinese firm: “500万人分の個人情報が中国業者に 年金情報入力を再委託“.

An extract of the article is enough to summarise the problem. Though I know every word in it, I didn’t understand what it was about until I read on the subject in English. 😕 Frustrating.

I find this affair very complex and I don’t have much interest in it, so I don’t feel motivated to read more on the subject… 🙄

Snow on the first day of Spring

Wednesday was the first day of Spring, but some parts of the country were covered with snow: “関東甲信の山沿いと東北 あすにかけ大雪のおそれ“.

I have been telling myself for a long time that I should learn Japan’s geography. At least the name of the regions, some prefectures and main cities. I am not very motivated to do it though…

甲信・こうしん is the name of a region, situated near the Kanto region. If I understood correctly, the Koshin region is only a part of the bigger Chubu region. It covers both Yamanashi prefecture (山梨県・やまなしけん) and Nagano prefecture (長野県・ながのけん). I found that the couple 関東甲信 is often used in a meteorologic context. No wonder, then, that we should find it in our title.

The title says that there is a risk of heavy snow in the North-East and mountainous parts of the Kanto-Koushin regions.

The snow fell so heavily that a group of 13 hikers were caught in the mountains and could not descend due to the snow. They had to be evacuated by helicopter and transferred to hospital: “東京・奥多摩 登山者13人全員を病院に搬送“.

Finally, let’s have a look at this article: 仮想通貨狙った新サイバー犯罪 被害は１年で６億円超. It says that a new form of cybercrime aims at cryptocurrencies. Last year, the equivalent of more than 600 million Yen (or less than 6 million Dollars) have been stolen. But in January of this year, the Japanese cryptocurrency exchange Coincheck has been hacked, resulting in the loss of around 58 billion Yen or around 550 million Dollars in NEM crypto-currency.  😲

How can there be such a gap between the total amount of stolen money last year and the loss of Coincheck in January? Maybe I made a mistake while calculating? I’m not at ease with numbers: 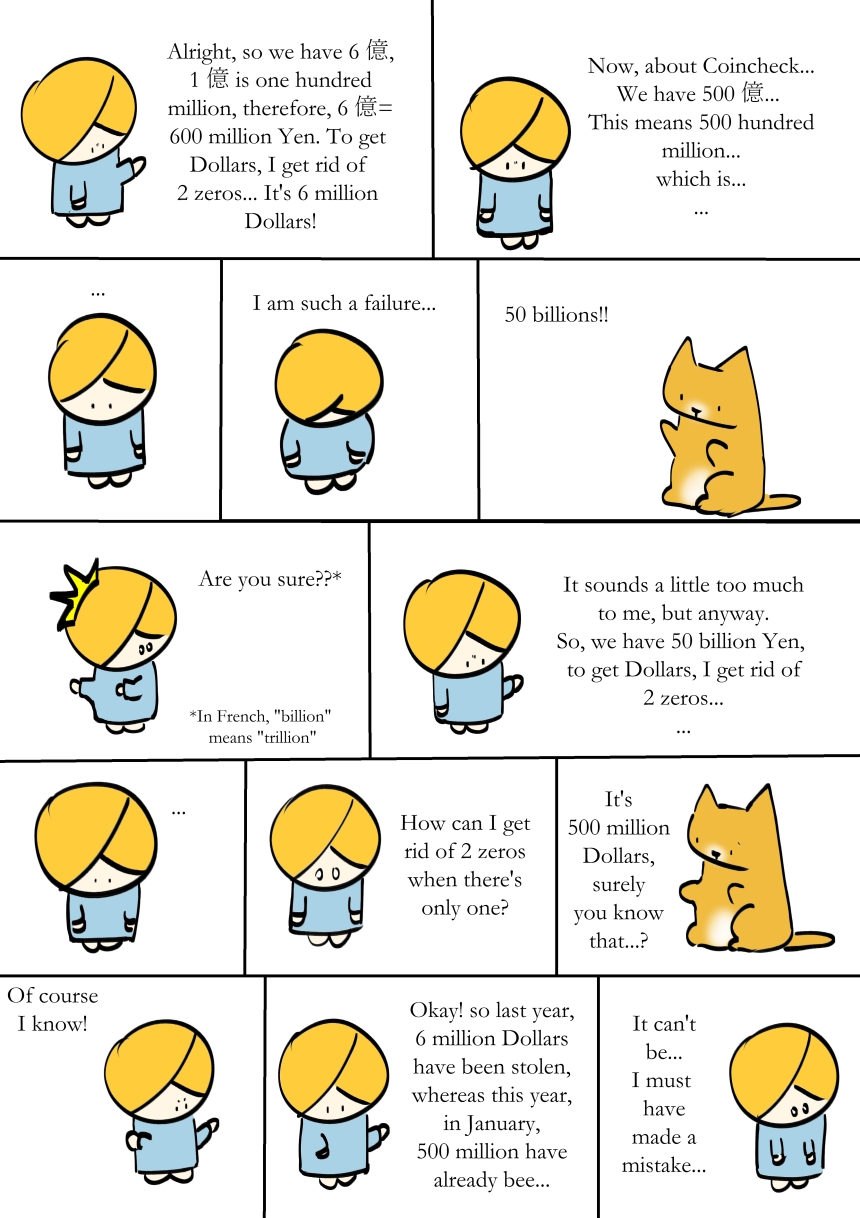 Welcome to my blog

I have been learning Japanese for several years, and my goal is to read books in Japanese. I post book reviews and other posts about reading in Japanese on my blog.

I am starting a new reading project in January 2022: read all the available winners of the Mystery Writers of Japan Awards (for novel and collections of short stories).

You can follow my progress on my Notion page.

Or use this template to join the challenge!