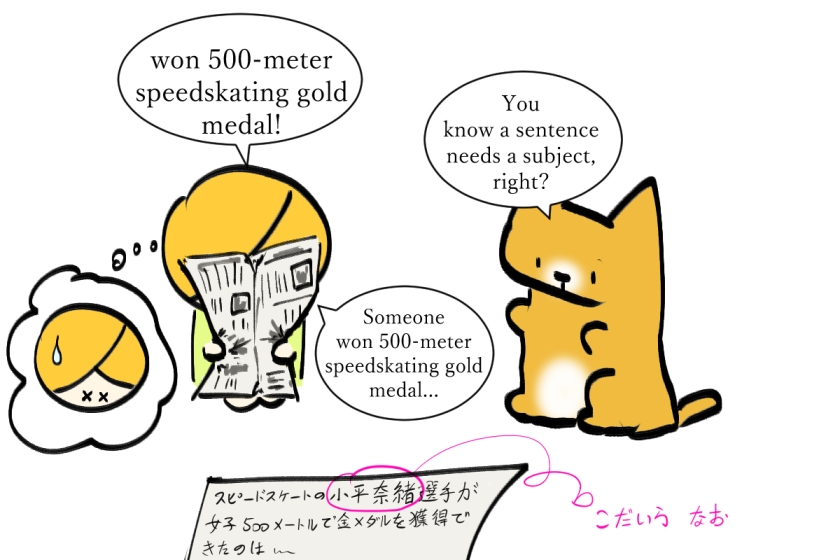 In fact, this is something I should have done much earlier. Last week, when I studied an article about ice hockey, I was both pleasantly surprised to see that I could understand it well and frustrated to not be able to read out loud the several names that were in it: 久保英恵、大澤ちほ、小野粧子、小池詩織、浮田留衣、山中武司 😵

To be honest, I have always tried to avoid remembering names. Even when I read a novel, I sometimes satisfy myself with being able to associate 2 or more kanji with a character, even if I have forgotten how they are pronounced. I think that I have a good visual memory of kanji, if you tell me at the beginning of a book that “正木藤次郎” is this character, I will remember it until the end. But it will be arduous to me to remember the pronunciation (まさき・とうじろう) of these kanji, and I will have to go back several times to their first occurrence (the only time they appear with furigana) before I remember it for good.

But at least, they appear with furigana once in novels… In most articles I read online, names are given without furigana (exception is made for キラキラネーム, names which pronunciation even Japanese cannot guess). Not being able to read a name is frustrating and finding the pronunciation can sometimes be a hassle.

I often ask myself how Japanese can know how to pronounce family names and first names when they see them. I think that they simply came across so many names in their life that they are used to them and can recognise them easily. Unless there is a secret method that I don’t know, I guess that the only thing we can do is pay attention every time we see a name and try to remember its pronunciation.

As I have a feeling that doing this will not be enough, I have decided to write down the names I come across, no matter if it is a real person’s name or a fictive one. I won’t really try to remember them or study them like standard vocabulary. But writing helps me to remember, and whenever I come across a new name, I will go through my list to see if I have already “collected” it or not.

I know that it will take a long time before I can start recognising names. I have been so lazy with that until now, that you could say that I start from scratch (I mean, I know how to pronounce 田中 and 山本, 😅but that’s about it…). I certainly should have started sooner, but better late than never!

I don’t know if it will work or not, but this is how I plan to work: I will note the name (family name and first name) and the pronunciation on a notebook. I will also write things concerning this person or fictional character because context helps to remember!  For example:

if it is a real person,

平野歩夢：ひらの・あゆむ: HIRANO Ayumu: wins the silver medal at the men’s snowboarding halfpipe (Winter Olympics 2018). He was ranked first until Shaun White made his incredible run!

if it is a fictional character,

北原十和子：きたはら・とわこ: KITAHARA Towako: the female protagonist of 「彼女がその名を知らない鳥たち」. Haunted by the ghostly presence of her former lover, she takes her frustrations out on her disgusting, simple-minded boyfriend.

Even if I know exactly who are these persons (or characters) now, I may have forgotten next year, and these names will be lost in a (hopefully) substantial list. This is why adding as much context as possible will help me to print these names in my memory. Months later, if I see the first names 歩夢 or 十和子 again, I may be able to pronounce them!

To conclude, I really think it would be cool to be able to read out loud Japanese names and avoid a situation when I don’t understand who we are talking about just because I didn’t know that this person’s kanji. I don’t know if there is another way to get better at reading names (maybe I am missing something obvious to other Japanese learners…), so if you have some tips or secret method, please tell me! 😊

(Some personal notes about English expressions, collocations, idioms and phrasal verbs I have learned to write this post)

take sth out on sb: “you shouldn’t take your frustrations out on the kids.”