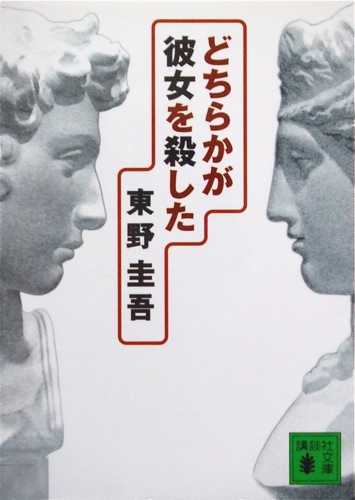 I have finally finished the fourth book of the Kaga series, by Higashino Keigo. I read this series because I like the personality of Higashino Keigo’s detective. But even if we do learn important things about Kaga in the first novel of the series and in 悪意, I didn’t feel that I got to know Kaga better in this novel.

In fact, in this novel, Detective Kaga is not even the protagonist, and the reader never reaches Kaga’s mind. We see the progress of Kaga’s investigation through the eyes of the real protagonist, a police officer whose sister is found dead in her apartment. I personally found very frustrating that Kaga was so little present in this novel, but the story was still exciting.

The reader must investigate, too

Higashino Keigo offers his readers not only a novel but a real investigation. Every detail counts, every description and dialogues can reseal something of importance for the case. In most of Higashino Keigo’s stories, the action is less important than logical deduction. With all the gathered clues, one has to make possible scenarios and see if every thing fit into it.

I liked the fact that the reader can participate and even has to participate. Instead of taking vocabulary notes I should have written down every clue, drawn a sketch of the scene where the body was discovered and noted what we learn about the two main suspects.

I appreciated this novel, especially the concurrence between the main protagonist and Kaga, and I also liked the end, which was very surprising. I was just disappointed that the focalisation never changed (like it used to do in other novels of the series).

As for the Japanese difficulty, it was not the easiest book I have read by Higashino Keigo. What was easy is that there were a few main characters, a few places and little action. That means little description. The whole novel is mainly composed of dialogues which are much easier to understand than narrative and descriptive passages. However, when there were descriptions, I found them challenging, with important but difficult words. As the reader has to understand every detail to be able to take part in the investigation, this book does require some amount of concentration.

If you want to read this book, you can check the list I made of all the characters that appear or are mentioned in the story.

To see a short review of other books from Higashino Keigo I read in Japanese, here is the page!