Like the majority of japanese learners (at least, I think so but I may be wrong), one part of my daily learning routine is anki. I have three decks, one for words, one for kanji and one for grammar (that I started recently because I just couldn’t figure out how to remember every grammar point from N2).

In this post, I will present my deck for japanese words.

It has three entries : french, kanji and hiragana. Every note has three cards :

French is displayed and I must say the word in japanese

The reason why I choose not to display the hiragana is because I tend to look only at the hiragana to check my answer and if correct, move on to the next card without even look at the kanji. No wonder I do not recognize the word (kanji) when I see it in a book or anywhere else later… I use the «hint» function to hide the hiragana and force myself to first look at the kanji. As for checking the pronunciation, I just listen to the audio (awesome tts) and don’t even need to click on the hint to display the hiragana. The audio is played when the answer is shown.

Nothing particular here. The audio is played when the answer is shown. This card is for me the easiest one.

Now we come to the most difficult card :

Hiragana is (dis)played, I must find the word 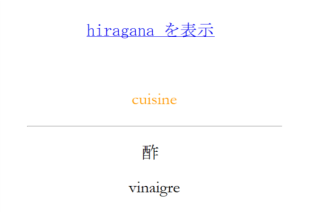 That’s certainly the trickiest part of anki. Mostly because there are some homonyms and because it is not easy to recall what something like しょうげん can mean without context. That’s the reason why I use an extra field to tell me in which context this word would appear. For vinegar it is obviously the kitchen.

When the card is shown, the audio will play automatically. I hid the hiragana to concentrate on what I hear instead of just reading the hiragana. So basically, this card is a listening practice.

The audio is read from the Kanji field. For words with no kanji, I just write the hiragana again in the kanji field so that I have audio for those notes too. Doing that has another positive effect. The notes with kanji create three cards, which means I see the word three times. On the contrary, notes with an empty kanji field generate only two cards and I see the word only twice. I knew that I had difficulties remembering the words written only in hiragana comparing to those with kanji but I didn’t relate this fact to the way my anki was built. Now that I have changed this, I can tell the difference.

Welcome to my blog

I have been learning Japanese for several years, and my goal is to read books in Japanese. I post book reviews and other posts about reading in Japanese on my blog.

I am starting a new reading project in January 2022: read all the available winners of the Mystery Writers of Japan Awards (for novel and collections of short stories).

You can follow my progress on my Notion page.

Or use this template to join the challenge!